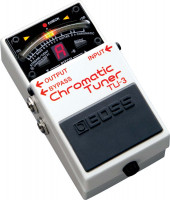 THE WORLD'S BEST-SELLING STAGE TUNERThe world's best-selling stage tuner, the BOSS TU-2, passes the baton to its successor, the TU-3.Housed in a rugged BOSS pedal enclosure, the TU-3 features a 21-segment LED meter and a High Brightness mode for easy readability in bright sunlight. Select either Chromatic or Guitar/Bass tuning mode and take advantage of the Accu-Pitch Sign function for ultra-precise pitch verification.The TU-3 is equipped with a display that can show the note names of a 7-string guitar or 6-string bass. The "Flat Tuning" mode allows the instrument to be tuned up to six semitones lower. This new tuner is sure to complement the pedals of bassists and guitarists around the world! 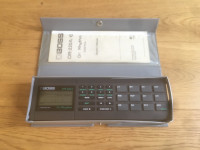 The Boss DR-220 Dr. Rhythm is a series of two budget-priced digital drum machines developed and manufactured by Boss Corporation (a subsidiary of Roland Corporation) beginning in 1985. Each DR-220 has 11 PCM synthesizer "voices" available, plus an Accent; each voice is directly available for realtime play using the four-by-three grid of miniature pads (though these do not sense either velocity or pressure). The voices are in 12-bit resolution, each occupying a 128 KB ROM bank. Because of "channel sharing" restrictions due to circuitry limitations, some voices cannot be sounded simultaneously; for instance, only one tom may be used per beat. With the DR-220, up to 16 steps are displayed (or 12 in 3/4 tempo mode). The "hits" can be displayed only one pad at a time. A pattern can be recorded in realtime, or entered step-by-step. Each voice can be adjusted for Accent (values 0-5) and volume (values 0-5). There are 32 in-built patterns, and another 32 are user-programmable and remain in memory after power-off. These patterns can then be joined into a "Song" of up to 128 bars (or 256 if the Song Chain feature is used to join two Songs), with memory space for up to eight Songs. Tempo can be manually adjusted between 40 and 250 bpm. 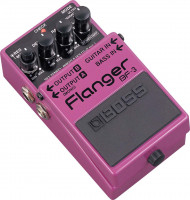 THE TRANSFORMED CLASSIC FLANGER The best stereo flanger sounds ever offered by a BOSS pedal. Ultra mode produces maximum intensity flanger effects, while Gate/Pan offers a full flanger with a super-cool "Slicer" effect that seems to "swirl" around your audience. 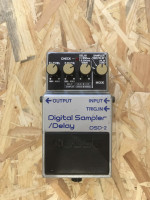 One of the first loop/delay pedals from BOSS.It combines a sampler (up to 800 ms) and a delay (50 ms to 800 ms delay). The Trig. In jack allows the delays to be synchronized with an external device with a Trig. Out jack. 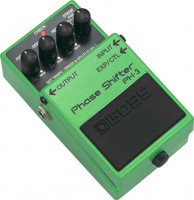 MODERN PHASER WITH SYNCHRO TAP TEMPOClassic BOSS phaser including 4, 8, 10 and 12 stage effects, plus new "Rise" and "Fall" effects for one-way effects. Tap Tempo or Rate can be controlled in real time via an external expression pedal.

Twin Stereo Tracks, Built-In Effects, & Pro I/O BOSS celebrates the 10th anniversary of the LoopStation with an exciting new lineup of RC-series loopers! First out of the gate is the RC-30, a Twin Pedal multitrack looper with two synchronized stereo tracks and built-in loop effects. Plug in your instrument of choice, or even a microphone; an XLR input is provided, complete with phantom power. Record for up to three hours direct to internal memory, adding effects as you go. The USB 2.0 port lets you save your loops externally, and import/export WAV files. 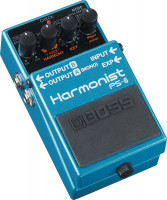 Four Intelligent Pitch Effects in a Stompbox Meet the new BOSS harmonist, with four intelligent pitch-shift effects and three-voice harmony in one convenient unit. Among the effect modes are Harmony, Pitch Shifter, and Detune, plus the all-new Super Bend for authentic pedal-bending effects and wild three- and four-octave pitch sweeps. You can even control pitch with an optional expression pedal. The harmony function is fast and simple to use, and supports a variety of interval patterns. It’s easy to create rich, three-voice harmony: choose a major or minor key, and set SHIFT to 3-VOICE—that’s it! The PS-6 Harmonist is an unbeatable combination of superior sound quality, ease of use, and powerful pitch effects, all under one hood. 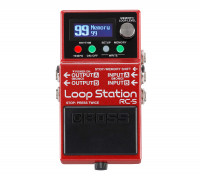 Step up to the RC-5 and prime your pedalboard with maximum looping range. Capture sound with premium 32-bit quality, navigate parameters and monitor loop status with the backlit LCD, and tap into expanded operation via the control jack and TRS MIDI I/O. And with over 50 rhythms, 13 hours of stereo recording, 99 phrase memories, and more, the compact RC-5 puts a deep well of musical power at your feet.

Travel to new soundscapes With the SY-1, it's never been easier to expand your creative arsenal with legendary BOSS synth guitar technology. This amazingly expressive tool in a compact BOSS pedal format is packed with 121 ultra-responsive sounds that will easily fit into any setup. It's as easy to use as classic compact pedals. You don't need any knowledge of synth programming to build your new world of sound textures. Expressive synth sounds without the need for programming The SY-1 turns any guitar or bass into a versatile synthesizer that's fun, inspiring and ready to play. Incorporating the advanced technology developed for the SY-300, this great pedal features a wide variety of analog synth sounds. All sounds are polyphonic, so you can play single notes as well as chords. 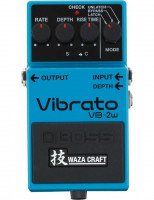 Ahead of its time when it first appeared in 1982, the VB-2 vibrato has been truly rediscovered by today's musicians, seeking to create striking guitar textures with stompbox effects. With its unique and expressive tone, this rare pedal has become one of the most sought-after BOSS effects in the vintage market over the years. Now, the innovative spirit of the VB-2 is reborn in the Waza Craft VB-2W. Using a fully analog circuit, the VB-2W authentically replicates the pitch modulation of the original vibrato pedal, adding a new innovative vibrato and real-time controls for even more expressiveness.

Released in 1976, the CE-1 Chorus Ensemble was not only the world's first chorus pedal; it was also the very first BOSS pedal. Three years later, this inventive new sound was incorporated into the blue CE-2 Chorus pedal. Since then, chorus pedals have remained in our compact lineup. Forty years later, the spatial modulation sound of the iconic BOSS effect is still a favorite of musicians around the world. In 2016, to celebrate the 40th anniversary of BOSS innovation, the original analog chorus sounds are reborn in the Waza Craft CE-2W pedal. The CE-2W's Standard Mode faithfully recreates the classic CE-2 chorus sound, and adds a new expansive soundfield with stereo output, an option not available on the mono CE-2. The CE-1 mode faithfully reproduces the stereo chorus and vibrato of the legendary CE-1, adding a variable chorus depth not available in the original pedal. And to commemorate the birth of BOSS effects, the CE-2W is made exclusively in Japan, as were the original CE-1 and CE-2.